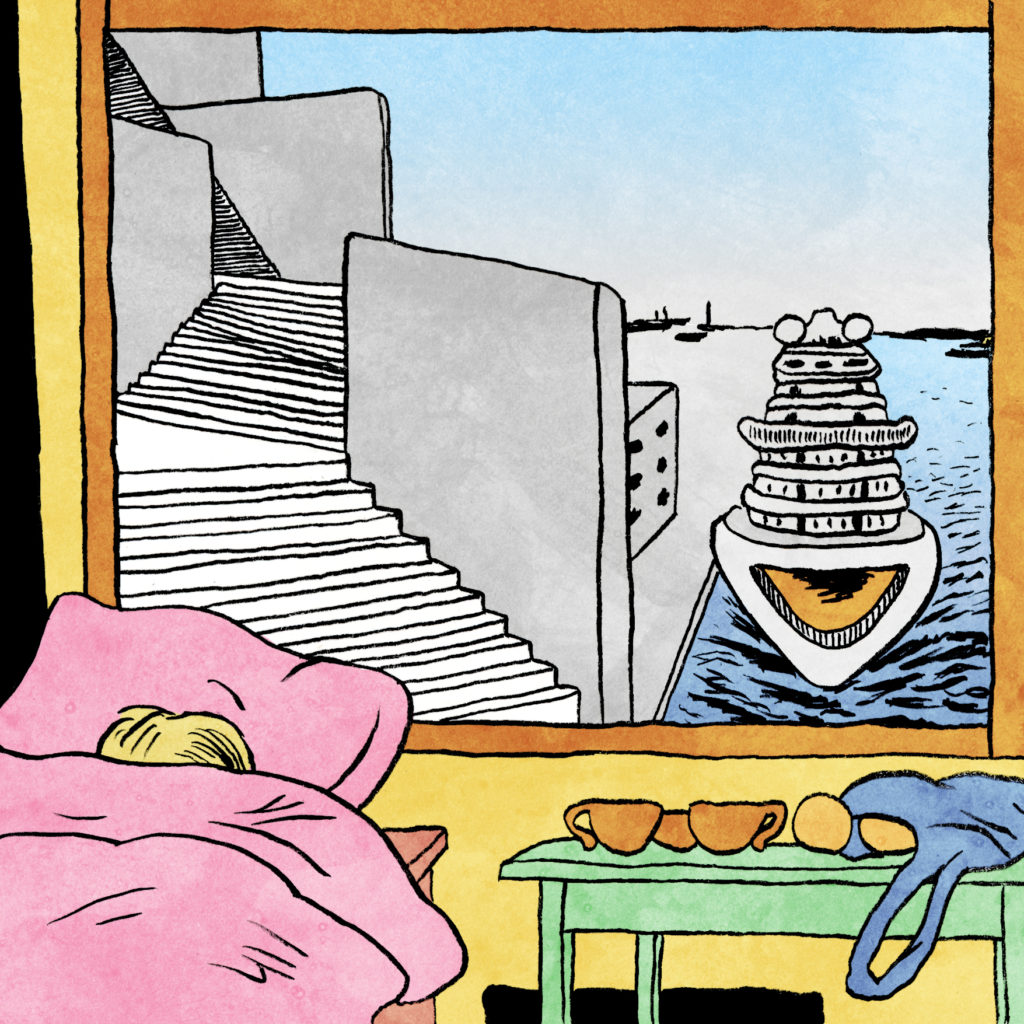 There is a smell of fish in the air. On the horizon, the air mixes with the sea, and at the shoreline, the sea mixes with rusty, greasy port machinery. Ships like giant sea monsters sail in an unknown direction, or maybe aren’t even sailing at all. It’s Monday morning, and I am looking out my window to find reasons to get out of bed. None found, so far.

Later, downtown, I meet my friends at the street market. I need to get something to eat. Everybody seems to be going somewhere. Blowing past without looking. Nobody knows I’m Russian as I pass through the crowd, speaking their language, which is my language now too. I nod to the lost souls, talking to themselves with shopping carts in hand, on their way to the bus station. Some oranges have fallen to the ground, and I put them in my bag. We don’t want to leave anyone behind. Stories about people’s lives hang from electric poles. Everyone is looking for an apartment or some broken old space for an art studio. Getting on the bus, I consider the risk of not paying. I could use a shot of adrenaline.

Sometimes, either when I’m in the mood or buying candy at Daliat el Carmel, I climb to one of the high spots in town, where you can still look far away, unobstructed in every direction. Haifa University is such a place. While people waste their time in the surrounding gray buildings, I go to the forest out back, far enough so I am no longer able to hear the cars.

The old pine trees out of this window are a glimmer of the village that this gray city used to be. Such memories are shattered by the train far below. Our stories are of where we came from and where we are going. But what if I don’t know where I am going?

I’m at Talek’s cafe. My addiction to coffee is a reasonable excuse. I like the man there, but his eyes are empty.

It’s nice that all the cool places are on one street. Sirkin street. It’s really been making a name for itself recently. All the buildings are covered with graffiti. I almost hallucinate because of all the colors. Unnamed artists fill in the blank spaces in between pieces by more established names.

I wish I could get into a crew, but being talented is never enough.

HQRN was open again for a late-night show, and a Tel-Aviv punk band that came through, performed a song about Haifa, especially for us. Good joke.

I like this place’s Kombucha. I like sitting outside, with the homeless, with a beer, with everyone wearing black. Sometimes I sit on the asphalt or the stairs to the communal garden. The only active compost pile is at 15 Tveria Street, but I don’t really know what happens there. I guess it’s not “cool” enough.

Dancing became a thing again because of studio Naim. You can see the train passing through the window there, and there’s a big square podium in the center of the room.

Of course, exercising in the city, happens to you whether you like it or not, with all the endless stairs everywhere. Going to a friend’s house is a Pilates class of its own. It doesn’t even feel weird anymore to record a message while barely being able to breathe.

On Friday I went to a party at Gag21, just to feel a bit less lonely, but everyone was speaking English.

I go to buy a sweater at the second-hand shop. I imagine that perhaps it was my grandmother’s. Everyone has a grandmother in Haifa. Mine likes to go for a walk on the shoreline on Saturdays.

You can’t run away from the endless sea. It surrounds you.

Birds on the electric wire fight for turf. Everyone says they get sick from the polluted air. Who knows what happens in that giant industrial zone. The clouds surrounding it are ominous. Do you smell it? I don’t. But maybe I’m sick too.